My and my cousin/occasional co-brewer Andy's affinity for DL Geary Brewing is well-documented. When Jennie and I recently visited the brewery, I made sure to pick up a case of Geary's Summer Ale for Andy. When I dropped the beer off at Andy's house, he was anxious to plan a brew day.

We were both pleased with how the Belgian-style tripel we brewed last year, The Commonwealth v Chalifour came out. Andy is in a place where he likes being able to brew a bigger beer and bottle it; a beer that can sit in his cellar and be enjoyed over a period of months and years. 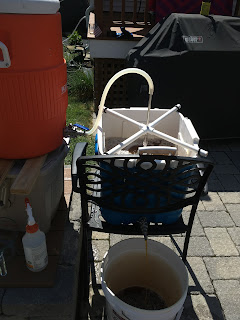 At the same time, I had a really nice response to my Pretty Things Jack D'or clone. One follower on Twitter sent me a clone for Pretty Things' Field Mouse's Farewell. When Andy wanted to brew another tripel, I immediately thought of Pretty Things Fluffy White Rabbits. I also liked the idea of Commonwealth as a one-off in honor of Andy's brother AJ's birthday.

The recipe I designed was not a clone of pretty things. While I used similar malts as Fluffy White Rabbits, the recipe took almost as much inspiration from a Michael Tonsmeire recipe  My tripel wasn't nearly as hoppy as either beer, and more closely fit the BJCP guidelines for the style.

For our second beer I suggested a marzen. Andy has always wanted to brew one. He brewed an extract kit with his wife last fall and wasn't totally happy with how the beer came out. For this recipe I revisited another one-off Andy & Juli's Weddingfest.

Knowing what I know now that beer was undone by not pitching enough healthy yeast and not oxygenating the wort properly. Andy and Juli enjoyed it, but I think they appreciated the gesture as much as anything. I reviewed the recipe, referenced Brewing Classic Styles, and made some adjustments.

Having not brewed in many months, Andy's basement fridge where he keeps his kegs was wide open. We were able to hook up a temerature controller and use the fridge as our fermentation chamber.

With both beers the goal is the same: to make a complex and flavorful example of the style that isn't heavy or cloying. Andy and I both particularly enjoy the German examples like Paulaner and Spaten. My grist was mostly Pils malt, but I did increase the amount of Vienna and Munich, and added a touch of Melanoidin Malt. The hops were all Tettenang as a tip of the cap to Samuel Adams Octoberfest.

The tripel went a little more smoothly than the marzen. We had a heck of a time stabalizing our mast temperature in the Chaltoberfest. We chilled both batches down to 90F. In the middle of the summer the ground water is too warm to get the wort to be much cooler. Both batches were pitched with some dry yeast.

My brew days with Andy tend to be more social and laid back. When we brew together I stopped worrying about getting the water chemistry and mash pH exactly right. If we can have fun and brew something that ranges in quality from decent to good I am happy.

Split batches are a great tool in the homebrewer's arsenal. Commercial brewers brew several days a week, if not every day. Even the most avid of homebrewer probably only brews once or twice a month. A split batch is a great way to make more than one beer without having to make two separate brews.

Transistor Radio is an American Wheat beer that was based on Shipyard Summer Ale. What was most striking when I poured the beer was its brilliant clarity. Ringwood Ale was so popular among brewpubs and craft brewers like Geary's because it ferments quickly, and at a time when beer clarity was desired, Ringwood Ale yeast produced a clear beer with minimal filtering. Every time I use WY1187 I am reminded why I love using it.

By modern standards Transistor Radio is slightly malty, but the Cascade gives the beer a light citrus flavor. I don't detect any diacetyl in the flavor, but there is a slickness in the mouthfeel. The carbonation is medium high, and the body is medium. The beer is subtle, clean, and very easy to drink. The carbonation and hop bitterness are sufficient to give the beer a smooth finish. Transistor Radio earns high marks for drinkability. It is perfect for a summer cookout or a beach day. 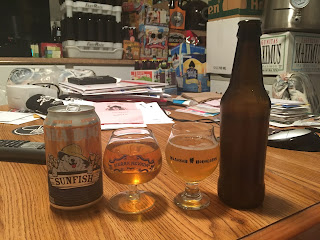 Summer of Jennie was inspired by, and not a clone of Sea Dog Sunfish. Jointly owned by and brewed at Shipyard, I used Transistor Radio as my base beer before adding peach puree, grapefruit zest, and a touch of grapefruit juice. Sunfish uses "natural peach and grapefruit flavor", which are more than likely fruit extracts. That is likely why Sunfish maintained the brilliant clarity that Transistor Radio had, while Summer of Jennie is quite hazy.

I wanted to get an unbiased opinion from Jennie which beer she liked better. Knowing the appearance of the beers would be a strong indication of which beer was which, I had Jennie taste both beers with her eyes closed. After one sip she identified the Sunfish and preferred the Sunfish. When I asked why she liked Sunfish better, Jennie said it was because Sunfish was one of her favorite beers. Okay then.

When I tasted the beers side-by-side Sunfish had a much more prominent citrus aroma and flavor. Summer of Jennie had more peach flavor with the grapefruit balancing the fruit. If I wanted to make Summer of Jennie more like Sunfish I would add more citrus or add a grapefruit extract.

On it's own merit, I love Summer of Jennie. I shared the beer with my old manager at Modern Homebrew Emporium Eamon, and the Mass. Brew Bros. who both thoroughly enjoyed it. I could also have dry-hopped Transistor Radio after splitting the batch if I wanted a hoppier wheat beer. Even half an ounce of Cascade could have livened up the beer to a degree.

I entered both Transistor Radio and Summer of Jennie into the Merrimack Valley Homebrew Competition. I think both will do well.

Do you know the Muntons man??

At the end of last year I thought I was ready to start some kind of professional brewing company. What I realized was that this wasn't something I was equipped to take on myself.  For Bleacher Sports Brewing to really work it would have needed it's own space from day one. To work it would need to have beer good enough to attract the craft beer crowd, but also be a a really great sports bar. To do it right and make it workable would have been very difficult and taken a lot of dough.

Really I was just very frustrated with my job. My career with my employer had hit a plateau. That I couldn't for whatever reason break through the glass ceiling really bothered me. Eventually I got past the anger and disappointment and renewed my focus. Half way through the year, 2017 was on track to be my best year yet!

While a successful 2017 made it easier to catch up on bills, I knew my next step would be elsewhere. Last week I saw a tweet that changed everything:


I sent a direct messagew expressing interest, shortly thereafter I spoke briefly with Muntons about the role, then had an hour-long interview, and was offered the job!

In my new role I will be working with craft brewers and homebrewers selling Muntons malt and malt extracts. I couldn't be more excited to work in two markets I am passionate about and make a good living doing so.

I have always been a huge fan of Muntons products. I used their Maris Otter in a SMaSH barleywine, and their extracts in many beers including my recent Thomas Brady's Ale and Summer Somewhere 2017.

It is still too early to say what my new career means for the blog. Whenever I use a Muntons product or otherwise feel the need to do so, I will be sure to disclose that I am a Muntons employee. I have on occasion used this space to share opinions on the beer market. I may step away from that type of content.

I have lost count of how many people told me this was the perfect job for me. It was almost embarrassing that people think my live revolves around beer to that extent. I also realize that most people aren't as consumed with their hobbies and interests as I am. As of July 31 beer and brewing will no longer be a hobby!

Email ThisBlogThis!Share to TwitterShare to FacebookShare to Pinterest
Labels: muntons

One of my Brew Year's Resolutions was to collaborate more. The idea was to brew more with others and brew less in my hot and tiny kitchen. This brew was presented to me and is a great opportunity to do just that.

The Mass Brew Bros are two local craft beer enthusiasts who have visited every visatable brewery in Massachusetts. Their website features articles, detailed maps of every brewery in Mass broken down by region, and a list of breweries in planning that is updated almost weekly.

I originally connected with the guys on Twitter and met them in person at Sierra Nevada Beer Camp 2016 in Boston. Now that my hours have been cut at Modern Homebrew Emporium for the summer, I hope to be able to make it to one of their upcoming tastings.

Like every beer-lover should, Rob and Bob have dabbled in homebrewing in the past. They had brewed some Mr. Beer kits a long time ago. When the guys wanted to brew a pretzel wheat beer, they reached out to me for help. The inspiration for the beer was of all things Shock Top Pretzel Wheat. Say what you will about AB's crafty brand, but that beer does taste like a pretzel.

The guys sent me a recipe from Brewer's Friend and a description of the Shock Top beer. Having tasted the beer once I had a fair idea of what it should taste like. The beer is essentially a darkeer witbier with a hint of salt.

For the grist I went with Belgian Pils malt for a rich, bready malt flavor; Torrified Wheat to add a doughy flavor and add body; Caramunich as my caramel malt to match AB's description; and Special Roast to add a light toasty quality. Crafty witbiers like Shock Top Belgian White and Blue Moon have a sweeter orange flavor to me than say Newburyport Plum Island Belgian White so I added sweet orange peel. I used one quarter the amount of sea salt that I used in my Westbrook Gose clone

According to my refractometer we missed our starting gravity badly. Unfortunately I didn't have a hydrometer with me to confirm the reading. Everything else went fairly well. I was able to pack up my car and make it home by 3:00 p.m. It was amazing how quickly the day went buy brewing just one batch and not attempting any other beer-related tasks.