I am a certified G and a bona fide judge… 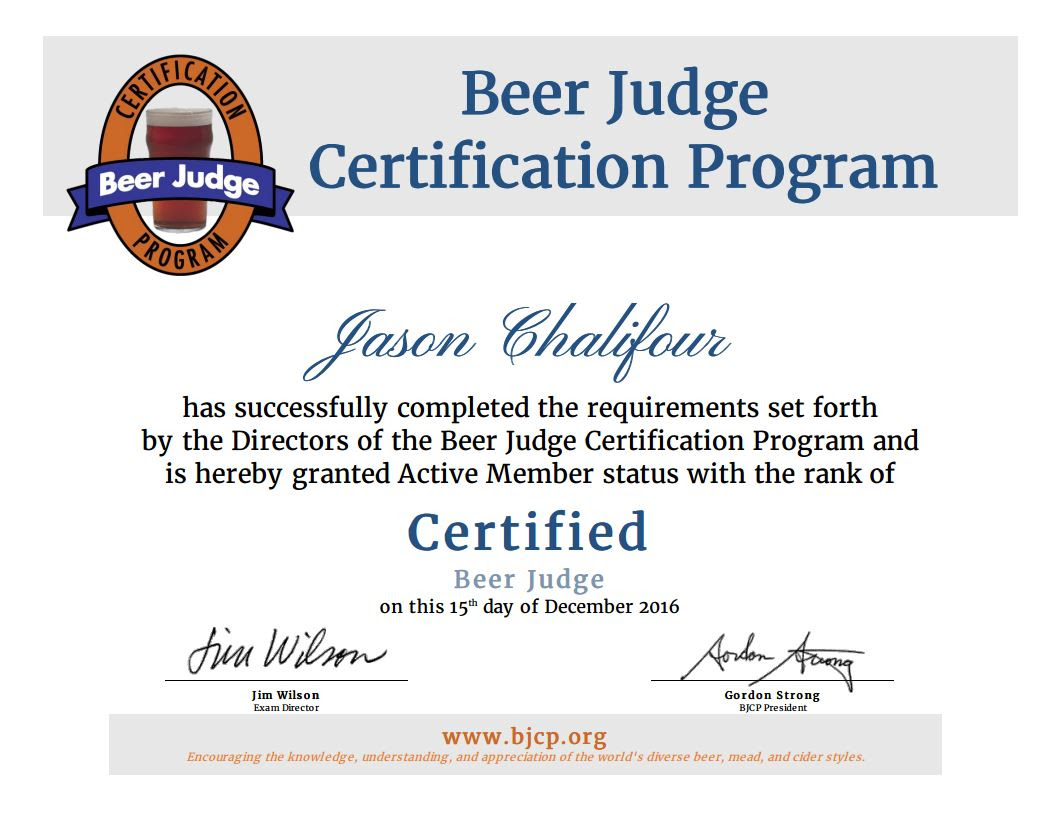 Well I did it. After retaking the Beer Judge Certification Program (BJCP) Beer Judging Examination for a second time I just barely scored high enough to move up in rank from Recognized to Certified. To move up in rank I needed a score of 70 and I earned exactly a 70.

I am happy that I set out to accomplish what I wanted to accomplish. Especially since I did not spend as much time studying as I originally intended to and probably should have. Still, I felt much better after this exam than I did my first exam in 2014. When I think of it that way I was a little disappointed in my score.

The two areas where I ran into trouble were that I noted characteristics in the beers that did not match what the exam proctors found. Perhaps I was over-thinking things and looking for off-flavors in the beer that weren’t there.

The other area that wasn’t strong enough was my descriptive ability. When I judge in competitions I find myself using a lot of the same adjectives to describe the beers I am evaluating. That is something I will look to improve at. Sometimes I think the fact I am a “meat and potatoes” guy when it comes to food hurts me here. One time I was attempting to score a hibiscus beer in a competition and I couldn’t have felt more in the dark. If I had more of a culinary background perhaps I would have better descriptors for beer.

Making the step from the rank of Recognized to Certified was fairly easy. In addition to improving my score on the Judging Exam, all I needed to do is accrue five experience points, half of those from judging.

The step up from Certified is the rank of National. National judges can proctor the Judging Exam. To move up I would need to improve my score on the Judging Exam to 80, and pass the Written Exam. The Written Exam consists of 20 true-false questions and five essay questions. I think I would need to go back on ADD medication for quite awhile to pass that.

There still are not many BJCP judges in the North Shore area. In 2017 I may put together a study group of aspiring judges who are interested in entering the program. If you live in or around Boston’s North Shore and would be interested in joining a BJCP study group email me. If I were to work with a study group, I could maybe see myself taking the Judging Exam again. Barring that, it is mission accomplished.


from WordPress http://ift.tt/2hPqJ0Z
via IFTTT
Posted by Jason Chalifour at 7:51:00 AM