Three years ago Jennie was tasked with finding "community bloggers" for the Beverly Citizen's website. Having written previously on a variety of topics, and willing to work for cheap (free), I was a logical person to ask. The blog is still hosted by the Citizen's parent company Wicked Local and has been picked up by sites all over Massachusetts. 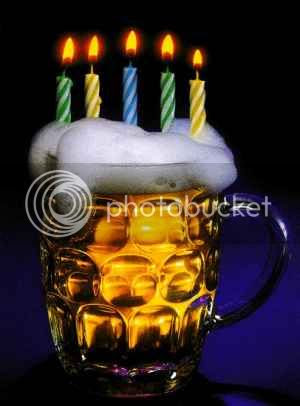 It really feels like yesterday I took some birthday cash, purchased my first homebrew kit, and Jennie and I made our first batch. At the same time it feels like forever ago that the back corner of my kitchen wasn't a cluttered mess.

If you haven't noticed I am the type of person who can be consumed by my interests. Brewing is the latest and shows no signs of slowing. At other times I have spend endless hours playing internet poker, Football Manager, other simulated sports, turn-based computer games, baseball statistics and history, health and fitness, and cars just to name a few.

Initially I was tasked with publishing two posts per week. Three years later that is still my goal even if I only achieve it some of the time. Three years is longer than I keep up with most things. I haven't lost interest or given up.

From the beginning this was nothing but an outlet. One man's, and sometimes one couple's journey down the rabbit hole. Three years later I haven't hit the bottom yet.

When Pretty Things Beer and Ale Project was still a going concern they were my favorite brewing company. A year and a half later I still have a few bombers in my beer fridge that I am holding on to. Their beer resonated with me be because like myself, Pretty Things brewed a wide array of styles. Pretty Things experimented without being different just for the sake of being different.

Last I heard, Pretty Things owners Dann and Martha Pauquette were brewing in Scotland. A year and a half later the taste of their flagship Jack D'Or becomes more of a distant memory. I opened my last bottle of the beer last November, almost a year after the brand ceased operations. I held onto that bottle for too long and just wasn't the same at all. Jack D'Or was a hop-forward beer and I should have enjoyed it fresh.


Jack D'Or wasn't a pure saison like Du Pont. Dann and Martha conceived the beer as an American table beer. The malts and hops were all American. A firm bitterness and four yeast strains gave the beer its spicy flavor that made it drink like a Belgian saison. Like many local beer lovers, Jack D'Or was one of the first saisons I can recall drinking. The only way I could relive that taste and the proper level of freshness would be to brew a clone.

A website called Crafted Pours published a clone of Jack D'Or. I am not familiar with the website, and there is no individual listed as the creator of the recipe. The recipe looks reasonable enough. I used that as a bit of a starting point.

Pretty Things website is still up with some information on their core offerings. The information was just some short blurbs, no deails like ingredients, ABV, or IBUs that would be useful for my purposes. Thankfully Beer Advocate still has a more detailed description.

Based on the description I removed the rye from Crafted Pours recipe, while tweaking some of the other malts based on what we carry at the shop. I adjusted the hop regimen so that the Nugget and Palisade were added late in the boil to more closely match the description on Beer Advocate. BA indicated there were four hops total. I don't recall Jack D'Or having a huge citrus or pine flavor so American Pale Ale or IPA hops wouldn't seem to fit. I used Columbus for bittering, and Northern Brewer for flavor. Northern Brewer can give any style of beer a rustic flavor.

A saison is supposed to be a dry, effervescent beer. As such I did add some dextrose to the recipe to dry the beer out and enhance the phenols from the yeast. For yeast I used a sachet of Belle Saison yeast I picked up at Homebrew Con last year.

I was really tempted to brew a five gallon batch. Having not brewed in almost two months I wanted to keep my brew day simple, have time to pull off a double brew day, and bottle Summer Somewhere.


Last year most of my batches were of the three gallon, brew-in-a-bag variety. This was my first such batch since February. I was still dialed in with this system. My volumes and starting gravity were both on the money.

Like I did three years ago, I plan to combat the summer heat in the brewhouse by brewing Belgian styles that I can ferment at a warmer temperature. Brewing on the third floor in the summer can be quite hot. Running the stove and an air conditioner in another room makes my circuit breaker go crazy.

I took Homebrew Con week off in case we decided to or were able to go. The upshot was that I was able to plan my brew day on the coolest day of the week. I have two other Belgian-style beers planned that I will be brewing at home. Hopefully I can brew on a relatively cool day again.

British golden ale is a style I first learned about when the draft version of the new Beer Judge Certification Program style guidelines were published in 2014. The style developed in England as a summer seasonal. Light in color and body, British golden ale is perfect for the summer. Unlike traditional bitters which are primarily malt focused, golden ale has a similar hop character to an American pale ale.

This is my third batch of Summer Somewhere. Every year the ingredients have changed, but the recipe has been mostly the same: 95% base malt, 5% flaked maize, British yeast. In 2015 I used Irish Stout Malt, Irish Ale yeast, and Galaxy hops, while last year I used Munton's Propino malt, London Ale III yeast, and Styrian Bobek hops with Cluster for bittering.

While rushing to brew Summer of Jennie, Transistor Radio, 'Murica and another beer for Homebrew Talk, I decided to brew Summer Somewhere as an extract batch. The thinking was that I could more easily brew an extract batch on a double brew day. I ended up brewing the batch while bottling and racking several other batches.

In keeping with previous recipes I used Munton's Extra Light extract to give the beer a British malt flavor, but keeping the color as light as possible. I added half of the extract at the beginning of my boil, and the other half at the end to guard against the extract caramelizing in the kettle.

I did steep a little bit of leftover Propino malt from last year to try and impart some fresh malt flavor and aroma from the freshly cracked malt. There are conflicting reports about steeping as opposed to mashing base malts. I made sure to steep the malt in a temperature range where the starches had a chance to convert. In lieu of flaked maize I used simple corn sugar to lighten the body.


With my malt and yeast I also took the easy route. I harvested some Ringwood Ale yeast from Transistor Radio, and used some of my bulk Centennial hops as the single hop

This batch is ready to bottle as soon as I dedicate some time to bottling. I want to enter it into a competition in July and have some time off coming up next week. I did rack the beer to a secondary to help it clear. This batch should be ready to go for July 4 and my homebrew club's summer cookout.

Searching for a new brewhouse

One of my most frequent laments in this space is dealing with the limitations of brewing in a third floor apartment. Our apartment is fairly nice, and the rent is very cheap. For brewing it is far from ideal. There is no yard or deck to brew outside on. Our electric stove can only boil up to 4.5 gallons, and it takes a bit of time to get up to a boil. We also don't have space for a kegerator or keezer, so I bottle almost all of my batches.

The blog has been quiet as of late because Jennie and I have been looking for a house. Her car is paid off and her student loans are almost paid off. Now is as good of a time as any.

As we look at houses it is embarrassing to admit how much I think about brewing. Does the yard get enough sunlight to plant hops? Could I run a gas line outside to hook up to my propane burner? Is there a place I can ferment lagers in the winter? Where will I put the keezer I want to build?

Having lived in apartments most of my life there are also some pretty mundane things I look forward to. Not having to go to a laundromat is mind-blowing to think about. I am super excited to be able to cook on the grill any time I want. A burger off the grill has been a special treat that I can only enjoy when someone else has a cookout.

Our apartment being as small as it is isn't conducive to entertaining. One time we had about five people over and it felt like people were standing on top of each other. Once we're moved in and settled, I look forward to having a huge housewarming party. I want to brew a ton of beer and make it a keg party.