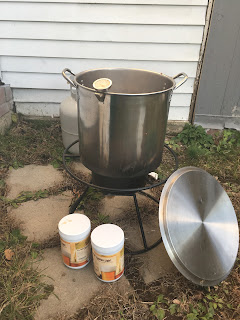 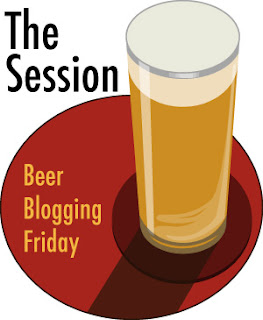 The Session, a.k.a. Beer Blogging Friday, is an opportunity once a month for beer bloggers from around the world to get together and write from their own unique perspective on a single topic. Each month, a different beer blogger hosts the Session, chooses a topic and creates a round-up listing all of the participants, along with a short pithy critique of each entry. Over time, it is the hope — of me, at least — that a record will be created with much useful information about various topics on the subject of beer. The idea for the Sessions began with Jay Brooks and fellow beer writer Stan Hieronymus, who noticed similar group endeavors in other blogospheres and suggested those of us in the beer world create our own project.

I happened to see Jay Brooks tweet about it. I initially thought he was looking for some type of guest post, but the concept looks really cool. I am a bit surprised that I just found The Session; the project has been ongoing since 2007.

Question 1: For our first question of the new year, what one word, or phrase, do you think should be used to describe beer that you’d like to drink. Craft beer seems to be the most agreed upon currently used term, but many people think it’s losing its usefulness or accuracy in describing it. What should we call it, do you think?

One of the dictionary definitions of craft that I found is: "an activity involving skill in making things by hand."

I recently visited a large craft brewery that opened within the past year. There were no brewers on the brewstand. There were a half dozen in an adjacent control room full of computer screens. Everything in this state-of-the-art facility was hard piped and the brewers in the room were monitoring and moving liquid from one vessel to the next. The bottling line employed numerous robots that did everything from removing pallet slips, unloading bottles off their pallets, to repalletizing full cases of beer to be shipped out.

Equipment and resources like this would be the envy of 99% of craft brewers. Does any of this meet the above definition of craft? Nobody would say advanced systems designed to ensure consistency and efficiency is a bad thing.

To answer the question, beer is beer. I've always believed people should drink the beer that they like even if it is not craft beer or hand-crafted.

Question #2: What two breweries do you think are very underrated?

This question would have been much easier to answer five years ago. As the number of breweries in the US has grown, more shelf space and draft lines are going to local brands at the expense of larger craft brewers from out of state and imported beers. We could list small brewers all day that most people reading this will never visit or drink their beer.

Email ThisBlogThis!Share to TwitterShare to FacebookShare to Pinterest
Labels: the session 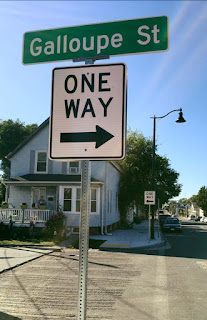 There really is something to be said for any brewer or beer drinker to have a house beer. A house beer being a beer that is kept in the house at all times. It's the beer you go to if you want to relax on a Tuesday night after work. For a craft beer drinker that can mean keeping a six or twelve-pack of a house beer in the fridge; for a homebrewer it's a beer brewed with some regularity and kept in stock.

In the past I tweaked and tweaked my milk stout recipe to perfect it. After continually tweaking, before finally dumbing it back down to a degree I am happy with the recipe. I haven't brewed a milk stout since Curly's Pumpkin Milk Stout. Partly that is due to my hiatus from brewing, but mostly milk stout isn't something I want to drink all of the time.

When we moved to our new home, and I built my keener, Jennie suggested brewing an easy-drinking beer to have as a house beer. Jennie came up with the name Galloupe Ave Gold. When we brewed together more, Jennie was always coming up with names for beer. The easy thing would have been to brew a British Golden Ale, but that is a style I brew every summer for the summer. I decided to look farther afield from the name of the beer for inspiration.

The first beer that came to mind for inspiration was New Glarus Spotted Cow. The Beer Judge Certification Program lists Spotted Cow as a commercial example for a Cream Ale, however the brewery bristles at that designation and calls their beer a "Wisconsin Farmhouse Ale". The grist in Spotted Cow is Wisconsin-malted barley, flaked corm as corn is widely grown in Wisconsin, and flaked barley. Several years ago we brewed Northern Brewers Speckled Heifer kit, a beer that as the name indicates is inspired by Spotted Cow. New Glarus holds their recipes close to the vest, but the ingredients in the kit gave me an idea of where to start.

Working for Muntons, and being well-stocked with Muntons' products, my house beer has to use Muntons malt. I took the domestic malts in the Northern Brewer recipe and substituted in Muntons malts. I'm using Muntons Propino Pale Malt as the base, Muntons Caramalt in lieu of Carapils, Muntons Brewing Wheat in exchange for flaked barley, only keeping the flaked maize. This grist looks an awful lot like an English Pale Ale. The color was a touch light for the style so I added a very small amount of Muntons Roasted Barley for color adjustment.

If I really wanted to be married to the style I would probably use Fuggle or Kent Golding hops. Having plenty of American hops in my inventory, and wanting my beer to have a bit of an American hop flavor, I used Columbus for bittering and Cascade for flavor. Both hop additions were small enough that our house beer should still be approachable.

My brew day went fairly well until it was time to add the beer to my fermenter. I was well short of five gallons. I'm still not dialed-in brewing outside with a propane burner. Instead of topping off with water, I just went with what I had. The beer did finish a couple points higher than estimated which isn't the worst thing in the world. On packaging day there was enough beer to fill a three gallon keg and a half gallon growler.

This is the first iteration of the beer. I am not married to the recipe and will tweak it until I feel I've nailed it. I could try using traditional English hops. I could use a darker crystal malt if the malt flavor is too generic. I think some amber malt could add a nice biscuit flavor.

What Jennie wants and I am trying to achieve with this beer is drinkability and approachability. I will know I have perfected this beer if it is a beer that both craft and non-craft drinkers enjoy.

As for the name, our house is on Galloupe Avenue, but when the city replaced the street signs the new signs initially said "Galloupe St". There was also some confusion with the direction of the street. I'm glad I snapped a photo so this multi-faceted fail can live on.

As I reviewed my Brew Years Resolutions from last year, my line "I have a feeling 2017 is going to be a big year for me personally and professionally" was more true than I could have imagined. After a good start with my resolutions,  a new job and moving to a new house really threw a wrench into my brewing.

Let's see how I did with last years resolutions:


A mixed bag to be sure. Going forward the key for me will be to fall into a routine with my career and brewing. Here are my resolutions for 2018:
I think that is a solid list for 2018. Happy Brew Year everyone and brew on!