In sixth grade I put off and I put off starting my project for the school science fair. Finally, a couple days before the fair I slapped together the easiest experiment I could think of. I tested static electricity by rubbing my feet on a carpet and touching a door knob. As a visual aide I drew pictures of myself rubbing my feet on the carpet, and the spark produced. As I presented my experiment to my class and how I had tested my hypothesis about static electricity, one intrepid classmate asked "Did this take you five minutes?"

Somehow I received a B minus for my "work". I was never the most devoted student, but I remember feeling embarrassed seeing everyone else's displays that they had put weeks of work into, then seeing my sad project. I was reminded of that feeling at this year's Ales Over ALS.

Last year's event was an emotional experience. I had planned to brew Larrupin Lou's for months, and Pugnacious Pete's for weeks leading up to the event. This year I had planned to brew a witbier, then I let life get in the way. In addition to my new job with Muntons and all the traveling that has entailed, we finally bought a home! As exciting and at times unnerving the past couple months have been, I was never able to brew the witbier.

Plan B was to bring Wet Hop Head. I figured telling people at the event that the beer was made with freshly harvested hops from Essex County would make them excited to try the beer. The week before the event I attempted to keg the beer and I realized I had lost my keg post socket. That meant I couldn't remove the dip tubes for cleaning or check the O-rings.

Plan C became to figure out what beer I had in bottles that I could bring and not run out of. The one beer I had more than a case of was Hazy Brown. That beer scored a 37 in a BJCP competition, and I was thrilled with how it came out. Additionally I found a case of an old cider while moving that I also brought to serve at the event. The cider was my take on Woodchuck Belgian White. 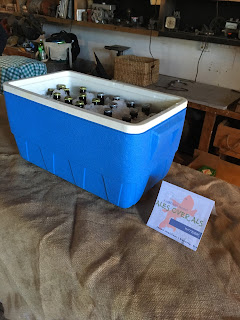 The day of the event I iced the bottles down in my cooler. After parking my car I tasted the Hazy Brown. Bottled in April it had held up nicely, but it was slightly oxidized to me. For the competition I decided to enter my Witcidre into the competition.

People seemed to like the cider. I think more people liked the Hazy Brown and it may have done better in the People's Choice voting. Three of the four judges gave the cider very favorable scores and writeups. One judge was decidedly harsh. To be fair, I agreed more with him.

This was a cider I made in early 2013. At that time I had been brewing for only a few months. I was still working at Target; After Christmas I stocked up on Archer Farms (Target Brand) Cider that had gone on clearance. I found the idea for a Belgian cider on a HomebrewTalk forum. When it was young, the cider was very dry and tart. I probably used the wrong type or orange peel or just used too much of it. In time that faded, but so too had the spice and any yeast character.

Instead of coming up with a plan and following that plan to brew something cool and interesting, I dug through my cellar and just brought whatever I could find. Both beverages I brought were enjoyable enough, but neither were the best representation of what I am capable of as a brewer.

This is six weeks after I couldn't manage to bring anything to Jamboree. Instead I got Muntons to sponsor the event and set up a table to exhibit. At least I exhibited until it rained. Currently I have Thomas Brady Ale, Sour Chris, Simple Cider, Pastinator, Jack D'Or Clone, Wet Hop Head and Chali-4 still in carboys. I need to get these beers in kegs and bottles, and then get brewing again.

I have a house with space to brew outside, a basement to store grain in bulk, and space for a kegerator. Next weekend it is time to fire up that kettle and get back on track. As for Ales over ALS 2018, I decided on my way home from Ales over ALS 2017 what I want to bring. I am going to brew it sooner rather than later, because this brew will need a bit of time!