Northern Vermont, specifically the area around Montpelier and Burlington is about a three hour drive from the North Shore. It may be a stretch to call it "our backyard", but we will go with it. If you can make it a day trip, it counts for me.

I had been meaning to make a beer pilgrimage to Vermont for a long time. When two of my Tweeps @HopSnobbery and @LipstickNLager organized the first Vermont Beer Week, it seemed like a perfect time to finally make the drive. I wasn't sure if we would be able to make it, until Newburyport Brewing asked my girlfriend and I to work at the Claremont Brewfest in Claremont, NH. Claremont is located right on the Vermont border. Since we were already part of the way there, it only made sense to continue on.

We purchased some beer at The Craft Beer Cellar in Waterbury, and stopped in at The Prohibition Pig and The Blackback Pub. We didn't have a hotel, so we could only spend a few hours in town.  At the Blackback we ordered a can of Heady Topper and a pint of Sip of Sunshine, and I was finally able to do a proper side-by-side and determine which beer I preferred.

Both beers are excellent, and determining between the two is splitting hairs. As a brewer I appreciate how the malt, hops, and yeast in Heady all noticeably contribute to the flavor. Sip of Sunshine has a perfect hop blend and an intoxicating aroma, without being overly bitter. I think I give Heady Topper a slight edge.

We weren't just "whale-hunting" beer tourists. We did try other beers from Hill Farmstead, Zero Gravity, and Prohibition Pig's own brewery. Everything was excellent, and I definitely plan to go back to Vermont and spend more time up there.

While the beer was excellent, that doesn't mean we don't have comparable beers here in Massachusetts. Trillium and Jack's Abby can stand toe-to-toe with Hill Farmstead when it comes to making hoppy beer. At The Blackback somebody saw our Newburyport t-shirts and said Green Head IPA was their favorite beer. We have so much great local beer that I don't typically feel the need to engage in beer trading, or waiting in long lines just for a limited beer.

I certainly did love some of the hoppy ales we tried on our short trip. Pale, cloudy, hoppy ales like the ones we had in Vermont and are being made all over New England are quickly emerging as a new regional style. This weekend I will brew my own interpretation.

This year I have rejoined and have been more active with the Northshore Brewers. This year was also my first year attending the New England Homebrewers Jamboree. The club brought an astounding 100 beers to the event. I brought a keg of the Galaxy IPA, and several other members brought their single hop beers. 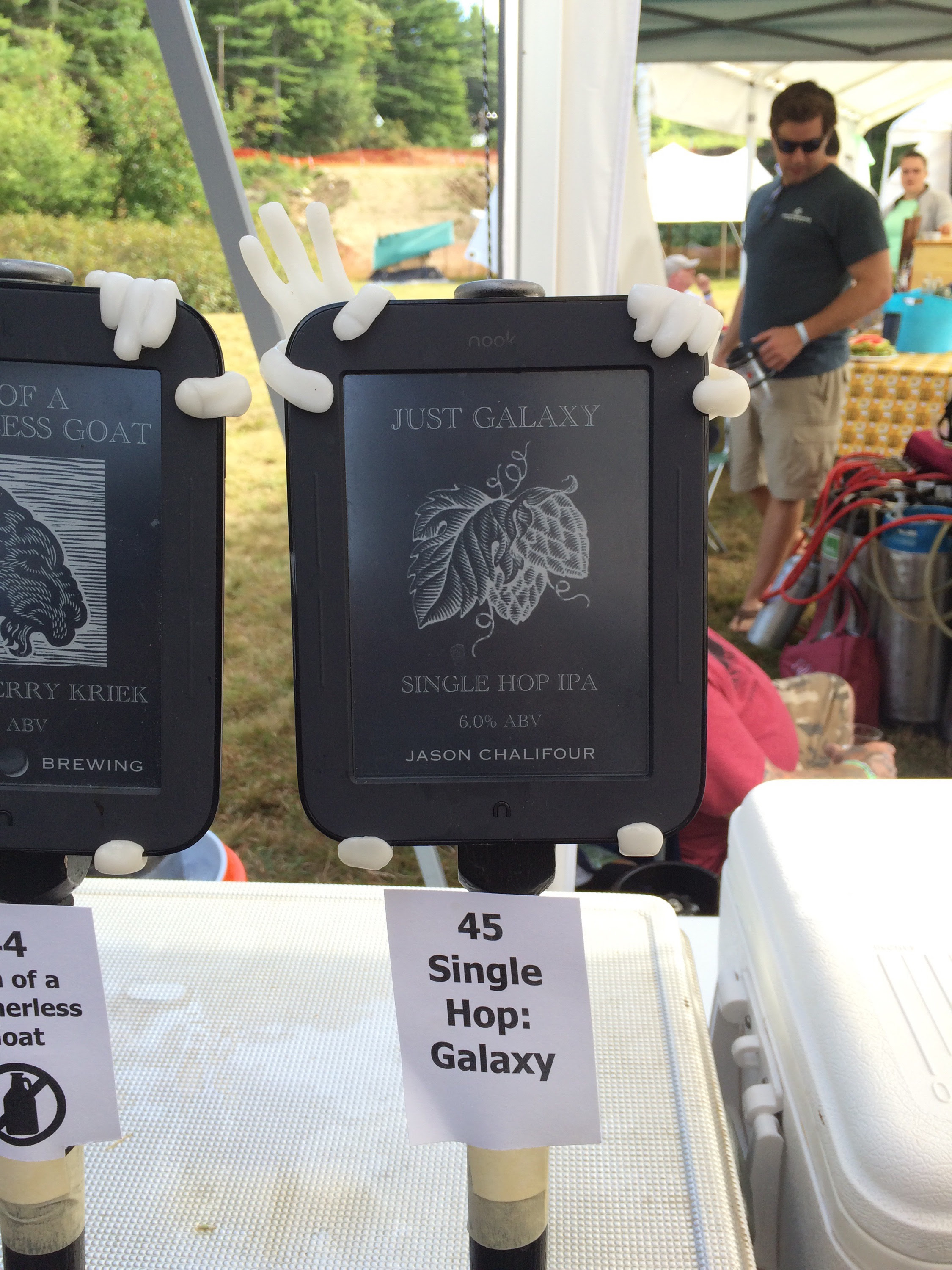 There were several other clubs there at the event and lots of great beer. I probably enjoyed too much great beer to have as many clear recollections of the event as I otherwise would. That the event is held at a campground allows attendees to enjoy their beverages responsibly by camping the Friday night before and Saturday night after the event.

Attendees are each given a token. Each participating club has a container, and attendees use their token to vote for his/her favorite club. The Northshore Brewers won for the second year in a row.

There was also a competition at the event. I haven't entered any of my beers into competition this year. Usually you have to ship or drop off contest entries to a specific location. This year I kept forgetting to send my entries in on time. The competition was not a Beer Judge Certification Program sanction competition, so I didn't bother to judge.

They announced the competition winners at the end of the day. I was pouring beer for the club at the opposite end of the field and couldn't hear anything. Evidently none of my beers placed. The only ones I really had hopes for were Curly's Milk Stout and Midlands Mild because the other beers I entered were old. The competition does not mail scoresheets, and I was not around on Sunday morning to pick them up. I bought camping tickets, and brought a tent and air mattress, but my girlfriend had no desire to camp. She stopped drinking and drove my car home Saturday night.

Alastair Hewitt, a member of the Northshore Brewers that works at Mystic Brewery in Research and Development won best in show. I do remember having one of his IPAs and it tasted like a commercial beer; it was that good.

Now I know what Jamboree is about I am already looking forward to next year. I plan to be there for the entire weekend and bring more beers and better beers. I'll see if Andy and his wife Juli would want to go. We could bring a keg of his Flagship Rye-PA.

The Jamboree is a great event that raises money for Make a Wish. Any beer lover would have an excellent time.

Regular readers of this space know how big of a fan I am of Maine Beer Company. They make some of the best contemporary hoppy New England ales. I finally made it to the brewery last week for an American Homebrewers Association (AHA) Rally.

While I have always wanted to visit the brewery, ideally it would not have been on a Wednesday night. The last time I drove two hours each way in one night would have been when my buddies and I used to make the trip to Foxwoods. We were so broke we would occasionally pool our money just to have enough to gamble with. An over-priced hotel room down there was out of the question.

The reason I made the trip was that the Brewers Association Board of Directors were all going to be at the rally. This is where a real journalist would prepare and show up with well thought out questions to ask these craft beer luminaries. A schmuck with a blog would just show up and scratch his head wondering what to ask these people. Guess which one was me!

I didn't even think to bring my copy of The Complete Joy of Homebrewing to have the author and Brewers Association founder Charlie Papazian sign it. It's okay, I will probably never have the chance to meet him again.

My girlfriend decided not to come, so I didn't know anybody there. As an introvert being in large groups, especially large groups of strangers is not my thing. I kept to myself for the most part. Maine Beer Company was pouring three beers: Lunch, Beer 2, and a special Imperial Stout they brewed for the event. We had two drink tickets. While it was hard not to have a pint of Lunch, I haven't seen Beer 2 in Massachusetts, and the stout was a one-off. I thoroughly enjoyed both.


The AHA had a lot of great raffle prizes. I was standing by myself while they were pulling the winning tickets when I felt somebody standing immediately to my right who wasn't there before. When I looked over I was shocked to see Kim Jordan, CEO and co-founder of New Belgium Brewing was standing right next to me. I tried to smile and she immediately walked away. On a variety of levels I really hope I didn't come across as a creep.

After blanking at the raffle, I made my way upstairs to the shop. It was too late to get a sample or a pint, but I did pick up four bottles and a sticker. With a two hour ride home ahead of me, I used the men's room before leaving. I then proceeded to leave my commemorative glass in the restroom. I emailed the brewery and they said they would be able to ship it to me.

The ride home alone was a nice opportunity to recharge. When my exit came up I drove right by it and took a little bit of a longer route home.

The lesson I take from this experience is being prepared and having a plan. I usually pride myself on my preparedness. Even when planning a brew day planning and preparedness are crucial. I didn't brew my Galaxy IPA with the correct yeast because I bought my ingredients at the last minute. I still haven't bottled the Rounders Brown Ale which is supposed to be a fall beer.

In the coming weeks I should have more time to actually brew some beer.

Follow me on Twitter @JChalifourLike The Would-be Brewmaster on FacebookShare what beers you are drinking with me on Untappd
Posted by Jason Chalifour at 11:17:00 AM No comments: