There are some practices employed by commercial brewers that aren't necessarily practical for homebrewers. There are also traditional methods that were employed for various reasons that no longer make sense with modern brewing methods and ingredients. Kräusening arguably fits both.

Kräusening is the process of adding actively fermenting wort, at high kräusen, to an already fermented beer. German brewers bound by the reinheitsgebot couldn't use priming sugar to package their beer would frequently use this method. In addition to helping carbonate packaged beer, the most obvious is you can top off a batch with the fermenting wort. My original impetus to try kräusening was when my Anti-Chris and Sour-Chris both finished under five gallons.

Kräusening when the beer is conditioning in a secondary fermenter had and is said to have other benefits: the active yeast can help ensure a full attenuation and/or jumpstart a stuck fermentation, the active yeast can clean up off-flavors (which is why Budweiser is kräusened), and it can help reduce oxidation.

In a pale, dry, high gravity beer like Anti-Chris, all of these benefits are appealing. Last summer, the only beer out of the four I brewed for my US of IPA project that I racked to a secondary was Broken Fist. At Jamboree Dave from SoMe Brewing sampled Broken Fist off a keg and noticed it was oxidized. The portion of the batch that I bottled were even worse over time. The beer took on an ashy hue, while the hop flavor was flat and generally unpleasant. A big, boozy beer like Anti-Chris will need to condition in a secondary fermenter.

For a commercial brewer that brews the same beer often, kräusening can be fairly easy. It is as simple as rigging up a hose from a batch that is actively fermenting and topping off a batch in another tank. For a homebrewer it is not that simple.

The easiest way, and only way I could see myself ever kräusening again, is to boil a small amount of dry malt extract, pitching some yeast, and add to your carboy after a day or two. Another option that seems workable is to set aside a portion of wort and yeast from brew day, seal them, and then pitched the saved yeast into the same wort after you rack the main batch to a secondary, and then blend back in.

I didn't have the foresight to do the latter. Even if I did, I would be scared of contamination. Not wanting to alter my original recipe, I didn't want to go with the DME route. What I ended up doing was brewing a mini-batch of Anti-Chris, pitching yeast, and then using it to top off the other batches. 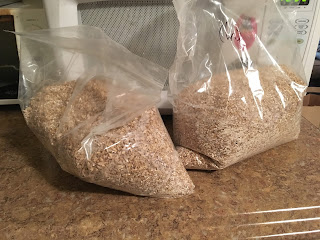 I shot for a two gallon mini-batch. Both beers I was kräusening already had ample hop bitterness. I thought it would be fairly easy to do a small BIAB mash, boil my wort for 15 minutes just to ensure it was sterile, and pitch my yeast.

Unfortunately Anti-Chris employed a 90 minute mash, plus a 15 minute mashout. In addition to those steps, the time it took to heat my strike water, and time to cool the wort, the mini-batch took almost as long as a regular batch. While I was mashing i racked Anti-Chris to a carboy.

I pitched my yeast and after 12 hours there were signs of active fermentation. At around 24 hours I poured the fermenting wort into the carboy of Anti-Chris to top it off. In hindsight I really should have gently racked the beer with a siphon. Pouring the beer as I did only introduced more oxygen. Hopefully the active yeast gobbles it all up.


Adding the wort to a carboy allowed me to monitor what was going on inside the vessel. My mini batch ended up at only 1.5 gallons. I probably blended in at most 0.25 gallons into Anti-Chris. The rest went into Sour Chris. As Sour Chris is still in a plastic bucket, I couldn't see exactly what was going on, but there was plenty of airlock activity. The mini-batch should boost the overall ABV of Sour-Chris.

We'll see in another six weeks when Anti-Chris is ready to drink if this was worth the effort. We will also see if I unnecessarily infected, oxidized, or otherwise altered the flavor of the beer. I did have a small sample before racking. It was dry, bitter, and some of the hop flavor was present. with some time to let the hop bitterness mellow it seemed like it was on its way before I dumped this extra fermenting wort in there.

While working on this, I did settled on the blend of dry hops I plan to add.  I am going to bottle the Anti-Chris and Pasteinator the weekend of April 15-16. That will give both beers three weeks to condition in the bottle before our club's competition.