With Jamboree approaching, I had already decided I wanted to brew my IPAs for my Untied States of IPA project, but Jennie had decided she wanted to brew her own beer to bring. I would periodically ask her over the course of several weeks if she had started on her recipe or had any ideas. By the end of July time was no longer on our side.

I wanted to be helpful and make suggestions without her beer becoming my beer. After she designed her Shareholder’s Saison I knew she was more of a “recipe innovator” in contrast to myself who is more of an “old-school master”. I scanned through the archive’s of Jennie’s cooking blog to try and find some culinary inspiration. When I scrolled down to her Salted Caramel Cookie Cups (amazing!! BTW) I suggested a salted caramel beer. Jennie loved the idea and was all-in.

We went back and forth trying to figure out what should a salted caramel beer should taste like and how to design the recipe. I started with a Southern English/London Brown Ale as the base style as it is sweeter and more caramelly. I designed my recipe to use rich, dark caramel malts. From there I added some light brown sugar to boost the gravity and alcohol of the beer while still providing a lighter underlying sweetness. The idea was to then blend in the salted caramel.

The recipe was a five gallon extract batch with some steeping grains. After four separate all-grain IPA batches in short succession, a quick and easy extract batch was just what the doctor ordered. 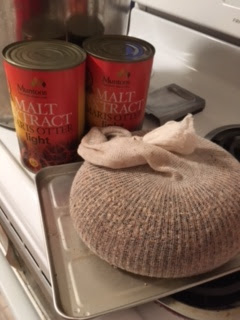 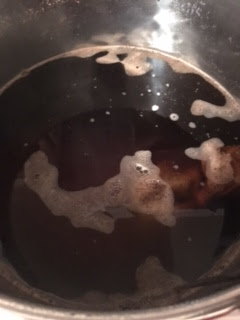 Somehow the Caramel 120 malt that I purchased for the Flyover IPA ended up in this beer. I ended up steeping three different caramel malts, all 80L and darker. To add a more lighter sweetness and boost the gravity I also added a pound of brown sugar.

In the end we never ended up having time to blend in actual salted caramel. When I kegged the beer I blended in caramel syrup and salt to taste. My fear is that the underlying beer is going to be too dark and will dominate the caramel and salt.

I kegged the beer and hoped for the best. Jennie really wanted to make a salted caramel beer. I’m afraid she is going to be disappointed with how it comes out. I am already thinking about how to completely re-imagine this beer if it is a dud at Jamboree.

Share what beers you are drinking with me on  Untappd