After another successful batch of Pa's Lager, I started to brainstorm about what other styles I could brew with San Francisco Lager WLP810 yeast. This is a yeast that can product lagers while fermenting at ale temperatures as high as 65F. In the throws of winter, now is the time to take advantage of cool temperatures in our apartment.

As I thought about lager styles I could brew, I also started to think that St. Patrick's Day is only a couple of months away. I started to think of taking another crack at brewing an Irish Red.

Back when I was fresh out of college most of my friends and I still didn't have our own place. If we wanted to have some beers and watch a game we had to go to a bar. We spent a lot of time at bars. In particular, the since closed Uno's on Endicott St. in Danvers, Mass. The draught special at that Uno's for what must have been two years, was a tall Killian's Irish Red for $2. We drank a lot of tall Killian's Irish Reds. While not a clone of Killian's, I do want to make a beer inspired by it.

The Killian's Irish Red name was actually acquired by Coors in the 1980s, and the beer brewed as a lager. Per the 2008 Beer Judge Certification Program (BJCP) Guidelines and Irish Red can be brewed as an ale or a lager. The newer 2015 BJCP Guidelines specify "Finally, there are some commercial examples that sound Irish but are essentially International Amber Lagers, with sweetish palates and little bitterness".

In a technical sense this beer falls into the International Amber Lager category, which is a bit of a catch-all category like the International Dark Lager category. Other than the yeast, this is an Irish Red recipe by any standard. It would actually be interesting to split this recipe, brewing half as a lager and fermenting the other half with a British or Irish ale yeast. 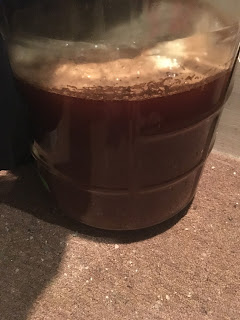 An Irish Red is a simple, easy-drinking pint.When designing the recipe I really tried to dumb it down: Irish Pale Ale base malt, a small amount of caramel malt for the characteristic red color, and an even smaller amount of roasted barley to help dry out the finish. I brewed this as a 3-gallon BIAB batch.

San Francisco Lager's Achilles heel is it's low attenuation. To compensate for the yeast's shortcomings with its attenuation I used some flaked maize and corn sugar in the recipe to help lighten the body. I also mashed it longer and at a lower temperature.

As soon as I find time to bottle my latest batch of Pugnacious Pete's, I'll rack Endicott Red into a 3 gallon keg for secondary conditioning. I want to see how much that helps the beer clear.


Click here for the recipe.Follow me on Twitter @JChalifourLike The Would-be Brewmaster on FacebookShare what beers you are drinking with me on Untappd