They say one of the signs of depression is no longer finding joy in the things that you love. The past few weeks I have certainly been feeling depressed. In early November I found out that Muntons was eliminating my position at the end of 2022. This wasn't a surprise to me. For at least a year my job felt tenuous. Still, when the call came it was a punch to the gut.

I was told I was being let go, but that I also needed to stay on the road to give as much support to Muntons' newest distributor as possible before I was let go. That meant multiple trips out of state. Time alone at airports or on six-hour car rides to the distributor’s territory which provided too much time to think about what I was going to do with my life. The days in the territory were hectic, squeezing in as many cold calls as possible with their sales team. Between sales calls in the car I did my best to share knowledge with a sales team with no background in brewing or the beer industry. At the end of those days were plenty of sleepless nights alone in hotel rooms.

The only thing that has been more depressing than knowing I was going to be out of work, has been looking for work. I hate LinkedIn with every fiber of my being. It's like someone decided we needed a social network for phoniness and corporate-speak. When I scroll Indeed none of the job listings look appealing. I am fortunate that several friends and colleagues have reached out; I do have some irons in the fire. Unfortunately, I am still struggling with a general sense of unease.

After five and a half years with Muntons I don't know if I want to stay in the beer industry or not. The conflicting emotions have been hard to process. Jamil Zainasheff wrote an outstanding column about selling his brewery and leaving the beer industry. The column hit so close to home that it moved me almost to the point of tears. After reading the column, I tossed the magazine aside and poured a glass of whiskey. Leaving what you know is scary. Similar to Jamil's feeling of being worn down, I feel worn down trying to compete with larger and better-run competitors. I also have thoughts that maybe if I or our team were more successful, I wouldn't be in this position.

The raw ingredients space is a specific niche without a lot of openings. I've applied for a few over the past year with no success. There are plenty of aging professional brewers with industry contacts the technical nous for these roles.

I recently met a head brewer from a 30-barrel production brewery.  I happened to be wearing my Muntons jacket, and he recognized it right away. The brewer mentioned that he and the other head brewer had recently met with the sales representative from their hop supplier. After the meeting he told his colleague, “Someday when we’re tired of brewing, that will be us. We’ll get a job selling hops or working for BSG.”

I replied, “Well, I went straight from homebrewer to the cushy sales job. I skipped over the production brewer step. What am I supposed to do now?” Any other job I could see myself taking in the industry feels like I would be starting at zero. Maybe the industry has chewed me up and is now spitting me out.

Anyway, I did have some time at home around Thanksgiving. I barely left the couch. I might have showered once every three days. I was a sad sack indeed. I wasn't motivated to do anything including brewing, but I made myself brew just to do something constructive and to occupy my mind.

It had been a couple of years since I brewed Pa's Lager so that needed to come back. The homebrew shop didn't carry Liberty hops, so I subbed in Hallertau Mittlefruh for the late hop addition. My crush was too fine and my sparge stuck immediately. I had to empty the mash tun and add several handfuls of rice hulls for wort to start flowing.

Munich Dunkel is a style I have wanted to brew for a long time. I have been slowly working through a 55lb sack of Munich Malt, and this was a way to use some of it up. The recipe was based on Jamil's from Brewing Classic Styles except I used Chocolate Malt instead of Carafa Special II. Even as I leave Muntons my disdain for debittered malt, and Weyermann malt generally remains. Leos are nothing if not fiercely loyal.

Ironically the day I found out I was being let go, I was at Mass Brewers Guild event and had just sat in on a talk from Ashleigh Carter, Owner/Head Brewer at Bierstadt Lagerhaus in Denver. Bierstadt is an all-German lager brewery. It is a shrine to beer nerds and professional brewers. I did follow a couple of Ashleigh's best-practices in these two lagers: 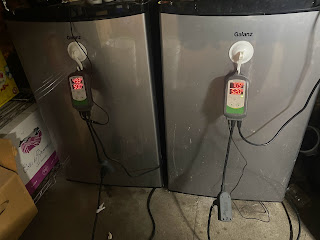 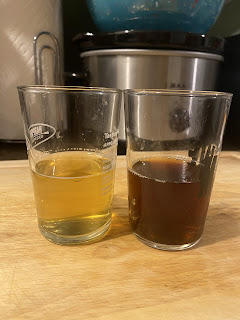 Both samples looked great, brilliantly clear. They tasted just about done. Pa's Lager may be slightly DMS-y, and the Dunkel really chocolaty. I’ll give them both a couple more weeks to lager before carbonating and serving.
Follow me on Instagram  @wouldbebrewmasterLike  The Would-be Brewmaster on Facebook
Share what beers you are drinking with me on Untappd
Posted by Jason Chalifour at 4:07:00 PM