Before I finally broke down and purchased Amazon Prime, I would always have to buy one extra item to qualify for free shipping. One such item I bought was Brew Your Own Magazine's 250 Classic Clone Recipes. My guess is this is an anthology of various recipes to appear in the magazine from over a period of many years. Some of the beers in there are no longer produced which in my opinion makes it cool that there are clones out there for a brewer who wants to recreate them. There are several in the book I would like to try.

One recipe that caught my eye was Sea Dog Brewing Company Blue Paw Wheat Ale. A beer alternately known as Sea Dog Blueberry Wheat Ale or Sea Dog Wild Blueberry Wheat Ale. As the Sea Dog brand is jointly owned by the owners of Shipyard, I suspect that Shipyard Summer Ale is the base beer for Sea Dog's various fruit beers. The information on Shipyard's website for Summer Ale, matches quite closely with Brew Your Own's base beer.

I find Shipyard Summer Ale to be a light and refreshing American Wheat Ale. I have fond memories of bringing Shipyard Summer to a Labor Day cookout when that was the only summer beer left I could find. I could easily brew a batch, split it after primary fermenation, leave half as it was to make a Shipyard Summer Ale clone, and add fruit of my choice to make a fruit beer. 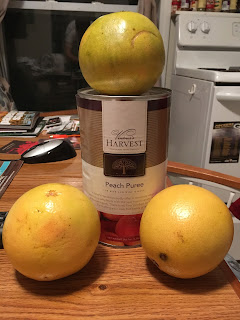 I asked Jennie if she wanted to add blueberry and make another blueberry beer. She wasn't overly enthused. I suggested any number of other fruits until I remembered that she really enjoys Sea Dog Sunfish, a fruit beer with peach and grapefruit. We had a winner.

I tweaked the recipe in the book to make it a six gallon, partial mash. The idea is to only have to do one boil, and end up with three gallons of each beer. I also adjusted the hops because I still had plenty of bulk Nugget and Cascade. The Cascade at 25 minutes in the boil should make the beer slightly more citrusy and less earthy than the commercial versions.

Since the hops are different I feel comfortable renaming the base beer and passing it off as my own creation. I'm calling the base beer Transistor Radio. It's a beer designed to be enjoyed on the back deck, by the pool, or on the beach while baseball is playing on the radio.

For Summer of Jennie I bought a can of peach puree and fresh grapefruit. I am going to rack the beer on top of the puree, grapefruit peel, and grapefruit flesh. The Dawson's Kriek kit used two cans of cherry puree for a five gallon batch. From that experience, I think one can for a three gallon batch will be sufficient. I also added the fresh peel of one grapefruit and threw in the flesh just because. Even though the beer is inspired by Sunfish, the hops are different and I am not trying to perfectly replicate the balance of fruit flavors, I don't consider it a clone.

Ideally I would have racked this beer already, but I've been under the weather with a nasty cough. I have one last summer brew I need to get in, then I have a lot of racking and bottling to do.